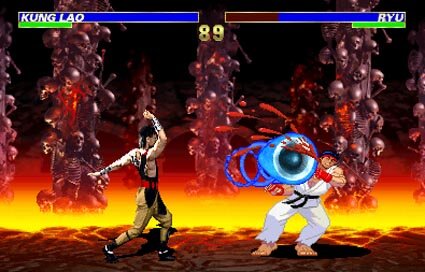 TRMK.org, the sub-zero source for all things Mortal Kombat, has a major exclusive to kung fu kick off the month of Apri:

A fighting gamer's dream has come true as Capcom and Midway have announced a major blockbuster announcement. The two companies have agreed to partner together for Street Fighter vs. Mortal Kombat on Xbox Live Arcade! While Capcom is hard at work at bringing Street Fighter II Hyper Fighting to Xbox Live, Microsoft has acted as an intermediary in order to bring the two companies together to the negotiating table.

Sources deep within Microsoft  inform me this game will be sold in a two pack with Barbie: Horse Rally.

Nice work on that screenshot.

Update: Ryan points out that if I'm going to perpetuate annoying April Fools jokes, I should at least link  to this Mortal Kombat vs. Streetfighter video.

Intrigue swirled yesterday when HiroProtagonist (aka J Allard) and other Microsoft glitterati showed up at the top of the leaderboard for Barbie: Horse Rally, the "amazing" next-gen sequel to Barbie Horse Adventures: Wild Horse Rescue. Indeed, a glance at Allard's and Major Nelson's gamercards on MyGamerCard.net show the plastic princess in heavy rotation (note the Barbie icon). Did Dollhouse Diva  somehow slip into the Xbox 360's stable under the internet radar? Sadly for hopeful gamers who grew up posing their little sister's dolls in sexual positions, I'm forced to report that Barbie: Horse Rally is horse hocky. Allard's pony-riding expertise appears to be an April Fools joke crafted by MyGamerCard and Achieve360Points.com, to the cruel disappointment of 6-year-old girls and Mattel stockholders. The screenshot is from the  2003 Xbox game, which did not have an Xbox Live component. It's not known if Barbie's all-too-brief appearance on the 360 will affect Rockstar's Malibu Stacy project.

Barbie's long-time boyfriend, who shall remain nameless, and her jailbait pal Skipper were unavailabe for comment.