Get fashionable this Holiday Season with Styledash
Posts with tag hype

Gears of War: the sitcom?

Apparently we were so busy playing GOW yesterday -- playing co-op with all of you is great by the way -- we failed to notice Penny Arcade's latest comic. If you're absolutely sick of all the hyperbole surrounding this game (or if by some off chance you actually like the idea), you'll find the idea of turning Gears of War into a sitcom fairly amusing. It brings up an interesting point though. For those of you who've played the game (and were able to find it), how is it stacking up so far? Does it live up to the hype, or are you happy playing something completely different? 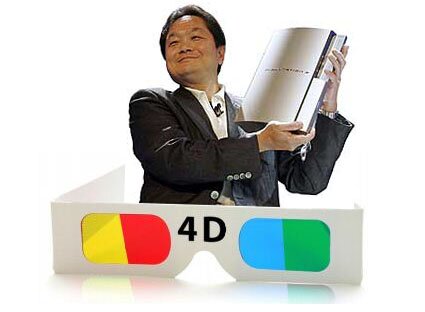 Sony's Ken Kutaragi, whose last name means "PS2 graphics like Toy Story" in Japanese, was up to his old tricks at the Playstation Business Briefing in Tokyo. Not to be outdone when it comes to confusing, poorly chosen buzzwords, the hype-happy Sony Computer Entertainment President claimed that PS3 games are "live" and that the Playstation Network Platform concept is "4D":

Hmmm...Live. Where have we heard that lovely market-tested word before? The Xbox developement teams delivers the smack down with the smarmy incisiveness of a pre-Tommy Boy David Spade:


Kutaragi-san, games have been "Live" since 2002.  Please find your own buzzword, kthx.
As for "4D," I can't process that term without thinking of "Smell-O-Vision" and those 3D movies at the amusement park where they spray water in your face. Maybe I'll understand what the hell Ken is talking about once I purchase these REAL PS3 4D GLASSES off Ebay.