Fanboy Poll: Is your Xbox 360 broken? 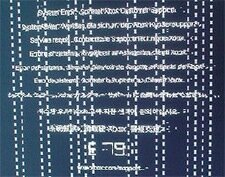 Sometimes the squeaky wheel gets the grease. Is this the case with all the reports of 360 flaws? Are the majority of average, albeit lucky, 360 owners doing just fine; playing PDZ on HD, wirelessly, while listening to music from their iPods? Or is there a massive problem, with recalls imminent. In the interest of getting closer to understanding the severity and scope of these problems we present our first ever Xbox 360 Fanboy poll, in collaboration with Joystiq.
Technical mumbo jumbo: this is not a scientific or rigorous poll and is only intended to capture the general consensus of Joystiq and Xbox 360 Fanboy readers. Results will be posted approximately one week after the poll is opened for votes. Sure, you probably could hack this poll if you worked at it, but it’s more fun for everyone if poll results accurately reflect the opinions of all readers, so please refrain from tampering with poll results.

I chose scratching my discs, because that was the closest thing to my problem.... my dvd drive makes a grinding/scratching noise whenever it tries and fails to load a disc.

but the discs don't appear to be harmed when they come out of the machine.

You shouldn't have to vote to see the results, the accuracy of the poll will likely be way off because of that.

Mine makes the same noises, but my PGR3 disc comes out pristine and pretty and scratchless. So whatever. Just turn up the surround sound. :D

running great, the only problem is on live. I can create rooms and people join fine. But I cant get into my friends rooms and optimatch and quickmatch don't work for me.

Overheating is my only issue. Or rather, was my only issue. Now that I have moved it into an area with proper ventilation, it is fine. The system itself never heats up, but MAN it puts out some serious heat. Raises the temperature in my room a good 5-10 degrees. All my other issues are purely on Live. Hope they get it fixed soon.

I'm concerned that "overheating" is the first option. To be more impartial a "No Comment" would have been better (survey takers know that at least 20% of respondents to the first question don't actually mean that answer).

Add to that the Xbox haters, and I'm sure the results are skewed. I really doubt there are tens of thousands of these (what this survey would indicate if applied to all 360s bought) overheating. If there were, the media would be all over it.

I dont' doubt it's happening, and I'm really, really glad I didn't get one of the first-run 360s, and I believe MS should seriously deal with this issue...

But I doubt it's as widespread as the poll above would make us think. If those results were extrapolated, more than 100K units would be faulty worldwide, which blows my mind.

I look forward to the Ps3 over the Xbox 360. But I am a fan of the X and humbly await more titles.
Peace!

look on the bright side guys, you wont have to spend extra money on heating this winter. (for those of you that pay for your utilities)

Microsoft is recalling the 360. Apparently the laser reader is too strong and is burning holes in the disc. Several of the demo discs from wal-mart had holes and microsoft was contacted but ignored the problem, now a recall is being issured.

I'm a recent convert to the XBox. Up until the release of the 360 I played the PS2. Socom 2 introduced me to online gaming and I haven't been socially or physically healthy since. So when people told me XBox is the way to go as far as online gaming, I listened. Now I'm confused. For instance: Madden 360, while it's revolutionary graphic wise, it's gameplay is worse than the PS2 version. There's not even a practice mode.
btw: Could the 360 be any louder?

So did MS do all it's testing in air conditioned labs ?.So far i've heard nothing about a recall,Ms will handle the problem with little fuss as possible because Sony can not buy that kind of anti MS publicity.Shame really.Typical MS stuff though ,Rush rush funnily a lot of the Anti MS stuff turns out to have some form of truth.We will wait and see.

I think The Xbox 360 is totally OVER PRICED who wants to pay for a system 500$ for Box with wiring in side of it......Its all a Hype that will soon pass They had this technology when they released the original XBOX but your all not playing the game here there sucking all your money out then putting a new XBOX360 in and taking it all Bill gates needs to get laid once in a while instead of ripping Teanagers off

I think The Xbox 360 is totally OVER PRICED who wants to pay for a system 500$ for Box with wiring in side of it......Its all a Hype that will soon pass They had this technology when they released the original XBOX but your all not playing the game here there sucking all your money out then putting a new XBOX360 in and taking it all Bill gates needs to get laid once in a while instead of ripping Teanagers off

My xbox360 died after 1 day.... i didnt do anything wrong with it my i just didnt got any tv connextion or something i thout it was my tv... i putted it in another tv it was the same i checked all the wire's and all was good. nouw i have red lights where it must be yellow or green or what color it is.. and up right is off... so now i need to wait 10 day more till i get a new one.... rly stupid..

I think Microsoft have tried to do too much. I.e. too much performance and processing power and too little cooling.