WoW players: we have all your patch 2.4 news!

CoD2.1: The Big Red Whatever 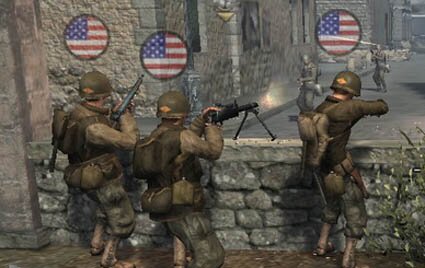 Reports from the western front confirm that the long-awaited Call of Duty 2 multi-player patch has finally been released—just in time for war-weary fans to not give a flying frag. The saga of this patch is as long and ugly as any WWII slog, including delays, fired forum moderators and pissed off PC gamers. Booting the game on your 360 now results in an auto-update that supposedly fixes CoD2's multiple issues. Initial testing by the Xboxic staff discovered the following improvements:

Are you finally hearing Infinity Ward's call to multiplayer duty? Who else thinks this patch is a day late and a dollar short?

[Thanks to multiple tipsters]

I would like to thank Infinity ward for releasing this patch; sure I have Oblivion and GRAW, but Im SO! Gonna play this game again! /end sarcasm here

Great patch except for the fact that you can not join a lobby. This game is useless online and has been a big waste of money!!

While I have GR:AW and love it, i'll probably be popping on cod2 every now and again. It has more of a deathmatch feel to it than GR:AW, which I enjoy.

That really sucks! I just traded Call of Duty 2 and Perfect Dark for Ghost Recon Advanced War Fighter at Gamestop.

Perfect Dark just sucked all around, so no loss there but COD2 is a great game.

I was very dissapointed in the fact that the online portion sucked cause of all the problems...and they still didn't address the only 4 on 4 matches...what the crap...why not 8 on 8 ...or even 6 on 6...it makes a huge difference in the feel of the game with more people.

Sigh...definately way too late in the game to even bother...Far Cry is just around the corner followed by BattleField 2 and I'm still having fun with GRAW.

By the way that picture is from Brother in Arms...not call of Duty???

Yes, I wish this patch was released sooner, but I'm ready to pop my copy of CoD2 back into my 360 right away. I'm sick of Halo and dont really care about GR:AW (my apologies), so this is great news to me.

I was all excited untill I updated and went to try it out and then something happened. "Could not connect to server!" WHAT THE F***!

Yes, IW got the patch out a day before the
Australian Xbox 360 release!

I just finished a two-hour (I think, time kinda flies by) session online playing CoD2 with my buddies.

This game rocks after the patch. I'm liking it much more than GRAW. GRAW looks nicer and has more options, but the gameplay in CoD2 is, IMHO, better. I think level design has a lot to do with it.

I heard about the patch and went back to play, but quite frankly, I was bored. I agree, coming after Ghost Recon meant coming too late.

In regards to #10:
It's really a different style of game, I see a lot of people coming into GR:AW without having played the previous Ghost Recon's and having trouble coming to terms with having to use a little more patience and observation compared to run-and-gun titles like Halo.

That being said, I hate the Boneyard... I just can't seem to see anything on it, too much contrast.

Can't wait till map packs start coming out, Ghost Recon 2 had a TON of maps released for it. Wouldn't mind a port of Quarry, or Pagoda :)

#12: You know you bring up a good point about classic maps. While I have never been a GR:AW player (although the game just came yesterday from Gamefly so I am going to be online with it and give it a try), the other games that I have played multi player such as Halo 2, Rainbow Six: Black Arrow and others that are sequels, I do not understand why the game developers can not include all of the previous versions multi player maps into the current version. Even if they had to make them available on download (and if they were really soulless money hungry money zombies they could even charge for them).

A good portion of the work is done, all the layouts and the creative work is done. Yes you would have to create it in the new version, but I would think that would only be about 20% to 30% of the work. This should also be something that game developers could take into consideration, and make some sort of standard in map files so that they can easily be converted to future versions. This way gamers that have been with the franchise since the beginning could play some retro maps, and new gamers could get the experience of playing some of the older classic maps.

#13: It's not the level layout itself that's so much work to move forward. All of the textures would have to be redrawn/recreated by artists to make the level look NextGen. Otherwise, it would look retro. That's a lot of work to do.

GRAW is a pretty awesome game, especially the single play. But the multi (barring a well setup custom match, and the awesome levels) feels like a five year old game (the gameplay ain't there). I personally feel the multi "feel" of COD2 is better. IE. GRAW is for spawnwhores. I'm glad they got the patch, but it's nothing I haven't been glitching for a month now. Plus I now have Oblivion (different but great), and Battlefield's conquest play is so close now too! Sorry GRAW, a great game to play with friends, or coop, but I won't be clanning it.

Sharpshooter in the GR series has always been filled with spawnwhores, find a good Last Man Standing room. They were the last bastion of hope for reasonable, competetive players on GR2-- and I see the same happening with GR:AW.

I think a big reason for not porting maps from a previous title has to do with compatibility. Not technical compatibility-- but compatibility with any changes to gameplay. GR2 was a game that would put you out in the woods, you'd have to be very careful and pay attention when spotting targets. The drone defeats that point.

The drone is nice for the Co-Op, and Campaign (both single and multi) gametypes, but I dislike it for player vs player matches.

GRAW is a game filled with your typical spawn killing morons(I regularly boot them or send them a Private Chat Request--it's quite gratifying to tell them how pathetic they are)...but who cares about customization for CoD2 if you can only put 8 people in the rooms? A day late? They are about 2 months too late to even bother with. I hope IW is listening to people tell them that they have failed; in the process they have shown everyone how great the Ubisoft team is by comparison.

Better luck next time, IW. You won't be getting my money.

Yes ... to little too late. GRAW's lag-free, user-friendly online game-play will make it likely that I'll not even bother and I loved CoD2 ... would have played it a lot online had the online component been done right ... oh well, perhaps in CoD3.