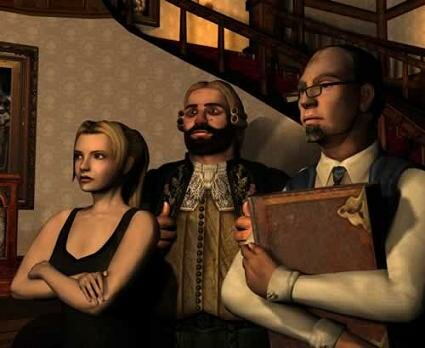 On his IGN blog, Dennis Dyack -- the man behind the upcoming Too Human trilogy -- reveals that Silicon Knights has plans for sequels to Eternal Darkness:

"I am most often asked if we have sequels in mind for Eternal Darkness. The answer is absolutely yes. Although this may not be obvious to those outside of Silicon Knights, anyone inside the guild understands that there is really no other answer."

For those who may be unfamiliar with Eternal Darkness, it's still one of the best games available for Nintendo's Gamecube. A survival horror title in the vein of H.P. Lovecraft, the game provides plenty of psychological scares and an involving story. One of Eternal Darkness' most interesting features is the "insanity meter." The more monsters players see, the crazier the character gets, and will eventually start hallucinating. The great thing about these illusions is that they would often break the fourth wall. For instance, you might enter a room filled with zombies when the game would give you a fake "please reconnect your controller" message. Good stuff.

Considering Silicon Knights' lucrative trilogy deal with Too Human, we can only hope that any Eternal Darkness sequels will hit the 360 as well.

now that would be kool...

haha i remember mid-game, they said something about a sequel... now, finally... maybe?

ED was a great game. I played through it 3 times. A sequel on the 360 would be awesome!

I agree - ED was one of the best games for the Cube.. I can still remember trying to get the fly off of the screen, and hitting it with a magazine, only to have the whole screen go black with bugs a second later...good stuff. I would definitly buy a sequel - no questions asked.

Trauts - yeah, in the middle I think the game stopped and said something like see the conclusion of the game in Eternal Darkness, Sanity's Redemption, and then it went back to the game. I wish more games would use the insanity meter - I would let my character get insane just to see all the cool effects...

Oh sweet Jebus, yes! I got a GameCube the winter of 2001 almost specifically for this game (and Rogue Leader and Perfect Dark 0. Hey, 2 out of 3 ain't bad) I love it to death. I remember freaking out the first time I got that "please reconnect the controller" message. I frantically lunged toward my Cube only to be completely befuddled when I saw that it wasn't disconnected. And I almost threw the controller when I got that sequel message.

Great to hear :), this is one game I really got into when I used to own a GameCube, and I agree that is it one of the best games on that system. I would be glad to see a sequil on Xbox 360.

Only problem is that Nintendo owns the patents on the sanity system of gameplay. Here's the patent

Ryan Heath is correct. NINTENDO OWNS THE PATENT FOR THE SAINTY METER!

I'm sure there must be some way for Silicon Knights to get around that. How can you patent something like that anyway? It's not like anybody patented bullet time. I bet if SK gave it a different name they could get away with it.