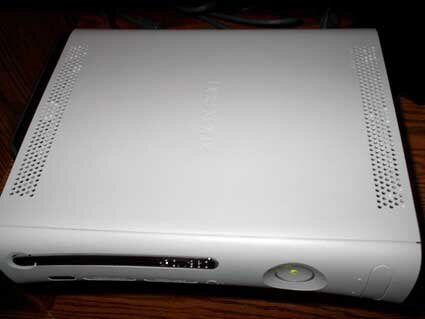 Some observant readers have written in wondering if any of the possible Xbox 360 heating issues could be linked to what appears to be "unpopped" ventilation holes on the console itself (see above).

We examined our own Xbox 360 and found it to have "unpunched" holes on the vents as well. After an exclusive, in-depth investigation, Xbox 360 Fanboy found that all Xbox 360s have the same pattern of unpopped vent openings.

Bottom-line: While it does look like a random pattern, it is consistent across all examined Xboxes and does not appear to be any kind of manufacturing flaw.

I kinda thought it was a code or something. Maybe binary? Part of an elaborate marketing campaign for Halo 3? Let the speculation begin!

/too lazy to investigate myself

Well, I think that the machine that punched said ventilation holes was just mis-aligned, since all of them must have come out of the same machine. :|

Now I don't have a 360 myself, but if overheating is a problem, maybe a usb powered laptop cooling pad might help out a little. If you have your xbox laying down of course.

The unpunched holes are actually punched. The blocked holes are blocked by the construction of the "screwless" xbox. They used the vent holes to snap some parts of the xbox together. So Microsoft inteded on those holes being blocked so that is not the problem. In fact, someone allready said that if you suspend the Power Supply and let the heat disperse from all sides of it, that it actually cures most of the heating problems. Like hanging it in mid air from a string or something.

Usually holes (unpunched or blocked) are kept for visual reasons but apart from the construction reason can actually be there to IMPROVE airflow - just like on a PC - certain systems don't get a good airflow if you pop too many holes in the case. I am sure MS meant to do this and as pointed out - the main problem seems to be from the powerpack - also looking at the holes, I doubt they would make that much difference if punched anyway.

those little holes dont mean shit, Its the power supply it needs to be in the air :P or ya dont have it in a gay spot dur

Ahh, the dawn of a new generation, more powerful than 99% of home PCs... How you stop it crashing? String.

To be perfectly frank, the heat problems the XBOX 360 has are a design flaw.

If you take a look at the pictures of the inside of the console, the DVD drive is seated on top the whole GPU heatsink, and it inmediate besides the CPU heatsink. This obviously transfers a lot of heat to the DVD drive, I wonder how long it will be before the drive itself stats malfunctioning, as every knows heat is the number one cause for hardware damage.

On the other hand, if you stand up your unit vertically, the DVD and hard drive is over the CPU and GPU. And besides the problems I mentioned earlier, everybody knows heat rises. If would have been a much better idea to have the DVD on the bottom, and the processor and GPU above it to avoid adding more heat to the equation.

I mean, I know they had limited smate, but come on.... just play a couple of minutes and take out the DVD. I wonder how much time you have to play in order for one disc to crack because of heat issues.

I don't know what all this talk about Xbox overheating is, I haven't had any problems with mine. It gets a little warm but nothing abnormal. The power brick warms up as well but again nothing too crazy. I think it's a great Idea to have power brick seperate, cause if those things ever fail, MS can just replace them instead of the entire 360.

A few holes one way or the other doesn't make a huge difference in overall airflow. As someone already said, it can fine-tune the airflow and they are filled in because of it being a screwless case and needing an extra mounting point. I've seen other products that have a few holes filled in and usually there was something on the other side of it anyway.

Don't lock your XBOX 360 in a closed cabinet. Make sure there is adequate ventillation in the front and back of the xbox 360. Don't put anything but a hard surface underneath it. Make sure there is nothing right on top or beside the xbox 360. You need lots of room for fresh air. On my closed cabinet I cut out the back of the cabinet so that there is an xbox size hole back there (just a little smaller than the xbox) I also leave the front door open when playing. That advice about the power supply is good too. Make sure it has as much air around it as possible. Setting it across the mouth of a small box is good.

So far my core system has been flawless. Not one problem, software or hardware. I am still amazed at how cool everything is. My power supply is sitting on the carpet...it is warm, but nothing unbearable, it is a high performance game console, I don't really hear people complaining that their Ferrari engines are hot to the touch, so what does it matter if your disc/power supply is...just don't touch it for a few minutes. My friend has a core system also, no problems whatsoever on his either. Ours came out of the same case.

havent had any problems with my 360 either,it works great. and also i work at our local walmart and we recieved a 360 about 2 weeks before it was released for public playing in our game case. its been on and hasnt turned off not once since we received it and theres always people playing it. the demo cd is still perfectly fine,no cracks in it from heat, and the system is in our game case so it doesnt get much air and it still works fine with no problems.

My router used to over heat when it sat on carpet so i put it on a hard back book this solved heat problems, maybe this would work with the x360. By giving it a flat surface would improve heat flow.

My Xbox 360 hasn't had any overheating problems at all I have my 360 on a open shelf of an entertainment center about 3 1/2 feet of fthe ground and then two shelfs below it i have the power supply sitting in a nice open area and my 360 was on all day yesterday from about 10 in the morning til like 12 at night and no overheating at all.

I also don't have the 360 but I would say its an overall design flaw with the power supply thats causeing the 360 to overheat rather then a few blocked air holes. It has a few big fans in the back and it looks to have a good heatsink. I wouldn't be surprised to see a recall on those power supplies soon.

My 360 has been on over 12 hours with no problems. It does get warm, as well as the power brick. I however, have all my A/V equiptment well ventilated.

The 360 has some hardcore hardware, people! come on! Just give the dang thing some breathing room! Don't be foolish and jam it in a little nook with no vent space for the heat to escape.

Design flaw, maybe. But just give it enough room to vent and all is fine.

Those are not unpunched holes.

I took the xbox apart (www.informit.com) and those holes are there as part of the screwless entry setup on the shell of the 360. The holes are there to keep the clips on the side grey plates connected to the white case.

i work at best buy we have a xbox 360 it has been on for 3 weeks and it has not had any heating problems. it is left on all day 24/7. it is also in an incolsed case the only time it was opened is when microsoft opened it to put it in. But the power supply is suspended underneath the kiosk with good ventilation

joking, but I bet that all the "overheating" problems we've been hearing about in the media could be solved by resting the PSU on something other than carpet, or even just securing it to the wall like I do with my Powerbar/Surge protector