If you've been reading Xbox 360 Fanboy for very long, you should know two things by now. One, we like us some Halo. 2, we like us some toys. Put the two together and you've got a head-exploding ball of happiness. it is with this in mind to you that we present a Halo grunt made of LEGOs. Created by legohaulic, the little guy really is the pinnacle of craftsmanship and functionality. His name, if you must know, is Flip-Yap. Hit the "read" link for many more images.

Now, if you'll excuse us, we need to wrap a firecracker in some gum* and see if we can't "stick" Flip-Yap here.

*Under no circumstances should you ever do this.

Bungie has posted a very lengthy chat with Todd McFarlane, big cheese of McFarlane Toys, the company behind the latest line of Halo 3 action figures. In the article, McFarlane details just what goes into the creation of an action figure from the day the project begins to final packaging. The article is also littered with lots of behind-the-scenes imagery like the articulated clay sculpt seen above. Also buried at the bottom of the article is the news that McFarlane is planning to expand the Halo line of toys to include "larger scale, dynamically posed" offerings. Sounds like the perfect thing to adorn one's cubicle, doesn't it? Oh, and yes, McFarlane is working on action figures wearing the Recon armor permutation. Much like Bungie is with the in-game variant, McFarlane is still being cagey about what we'll have to do to obtain one.

Who needs a ride? The Halo inspired RC truck

Someone call Microsoft! This nitro injected radio controlled behemoth that was found on Hobby Media looks like the red-headed step child of Halo 3's Warthog. This reminds us of that old Conan segment where he'd show you what a kid would look like if two celebrities hooked up. If a Warthog made sweet lovin' to Grave Digger, you'd get something that looked a little like this. Something you don't talk about at family reunions.

There are still a few questions that remain however. Among those are price, release date, and whether we choose the large plushie or the dangling rear-view mirror plushies. Oh, who are we kidding ... we're getting a dozen of each.

Todd McFarlane has been busy high atop McFarlane Towers (which is a bit more fancy than Fanboy Towers) trying to figure out new ways to capitalize on Halo 3 fanboys' love of his ever increasing collection of Halo 3 action figures. And his persistence paid off, because he came up with two new money making ideas ... the use of color and armor permutations.

Just announced are five new Master Chief action figures (all viewable in the gallery below) that include Master Chief sporting Mark VI armor in red, blue and white, a red blue C.Q.B. armored Spartan and a blue red E.V.A. armored Spartan too. All five newly announced figures will be available March 2008 and some will be available exclusively at Wal-Mart or specialty stores nationwide. McFarlane, you little entrepreneur you.

Hey, remember that nifty overheating plasma rifle replica we talked about last week? In Bungie's recent weekly update, we not only got new details on the wonderful device, but we also got the first images too. Jasman Toys had both the plasma rifle and pistol prototypes on display at Comic-Con last week. Speaking to Bungie, the toymaker noted that the replicas would feature accurate sound effects and recoil. While they didn't mention if the plasma pistol will also open its exhaust port when overheated, they did confirm that it will have a "super shot" mode that inflicts more damage. Speaking of the Laser Pursuit functionality, Jasman noted that it is more than just laser tag. The targets will behave like shields in the Halo games. Take too much damage, and the shields will die. Take cover for a few seconds, and they will recharge.

NECA has announced a new partnership with Epic Games, in which it will produce a new line of Gears of War collectibles. Said collectibles are set to include action figures, busts, dioramas, and even "prop" replicas (full size Lancer anyone?). The toys collectibles are expected to be available in 2008, just in time for a possible sequel to the 360's breakout hit. An interesting tidbit in the press release is that NECA has acquired the license for Gears of War and "any potential sequels" to the game, adding fuel to such speculations. For those who are interested, NECA has produced many video game related collectibles, including toys based on Resident Evil, Hitman, Tomb Raider, and an upcoming line of Castlevania toys. No further information, such as which specific Gears of War toys will be made or how much they will cost, has been revealed.

Jasman Toys announced back in February that they were creating a line of Halo 3 toys -- with laser tag abilities -- based on the Covenant plasma rifle, plasma pistol, and energy sword. They have announced today that these new toys will be unveiled at the San Diego Comic which begins tomorrow. The company has also revealed that the replica weapons -- not to be confused with those weapons from Master Replicas -- will include several features in order to give them an authentic look and feel. For example, should you "overheat" the plasma rifle, the sides will open -- just as they do in the game -- in order to allow the excess "heat" to vent. We hope this functionality is applied to the plasma pistol as well. Jasman also revealed the expected prices for the plasma rifle and pistol. The rifle will retail for $119.99 (ouch) and the pistol will cost $79.99 (ouch again). Both will be available in October. The sword won't be available until 2008 and (thankfully) has yet to be priced. Hopefully, we'll get to see these in action as Microsoft brings Comic-Con home. 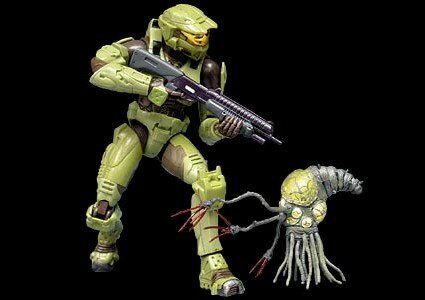 Joyride Studios has released Series 8 (they're up to 8?) of the Halo figurines. Among them are Spartan 117 with Flood infection form, a SpecOps Elite, a Jackal, and the Elite Heretic Leader. Why anyone would buy the Master Chief again just to get a Flood form is anybody's guess. Because I already have Master Chief. I mean, all of you have Master Chief, right? Right? Anybody?