[Update: This giveaway is now closed and our winner has been chosen. Check your inbox (and spam box), you might be the winner.]

Hooray for Fanswag! This week we're giving away EA's latest racer, Need for Speed Pro Street. We've got a brand new, sealed copy just for one lucky reader. If you'd like to see yourself in the driver's seat, simply follow the instructions below.
You'll notice that we've allowed one entry per day again. Be sure to enter all three days to maximize your chance to win.


Remember the Need for Speed teaser that was released just over week ago? The one that told us to check NeedForSpeed.com on May 31? Guess what? It's May 31, and EA has officially announced ... a Need For Speed game (imagine that). The new game, subtitled Pro Street, focuses on players becoming the world's greatest street racer. The press release mentions fully customizable cars that you can fully tweak and tune for maximum performance. It also gives us a few tiny details about the damage system, noting that "every dent, every scratch and every crumpled body panel is a battle scar, proof of your commitment and competitive mettle." The game is also slated to have a "revolutionary online mode," though no concrete details are given. Need For Speed: Pro Street is scheduled to release this November. Watch the (slightly) extended trailer above and check out the screenshot gallery below.


A new trailer has popped up for the next incarnation of Need for Speed. At the moment, the game goes without any subtitles, leaving us unable to properly identify it. The trailer shows off a real purdy car which subsequently explodes, and really, what more do you need from a video game? The trailer concludes with a quick blurb directing viewers to check out NeedforSpeed.com on May 31st. Impatient people that we are, we decided to check it out now, and were sadly greeted with the website for Need for Speed: Carbon. Sigh ... guess we'll have to wait.

EA is getting into the Collector's Edition racket with an upgraded version of Need For Speed: Carbon on sale October 31. Here's what you get for $69.99:
What? No cat helmet? Couldn't they have thrown in a Match Box Car or a spare tire? Notice that unlike Gears of War and Halo 3, two games far more likely to attract the rabid fan, EA thinks they can get away with charging extra for actual game content -- stuff that could easily be included on the regular disc or thrown up on XBLM. Is this a fair deal, or are you starting to get that Lumines Live content gouge feeling?

Been looking for something to fill up that free space on your increasingly crammed 360 hard drive? Download the demo for the latest Need for Speed, dubbed Carbon, and watch 1GB disappear. Of course, this only applies if you live in an area that's not Hong Kong, Japan, Korea, Mexico, Sinagpore or Taiwan ... but we know what to do about that, don't we?

Promotional blurb from the Dashboard hidden after the break. 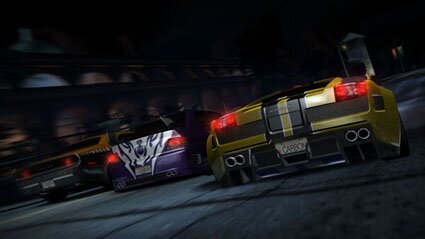 EternalGaming scored some details on Need For Speed Carbon from the same source who leaked early deets on NFS Most Wanted:

They also report that the police will be several times stronger than in Most Wanted, and that you'll have the ability to customize your crew's rides.