Alright, so it didn't make it this weekend as anticipated, but the multiplayer demo for The Outfit is up now on the Xbox Live Marketplace. Although anyone with an Xbox Live Silver account can download the demo, you'll need a Gold account if you want to play the full 8-player "Destruction on Demand" experience online. Silver users will have to settle for good, old-fashioned 1-on-1 split-screen. The demo features one map and one game type... should be just enough to keep you busy until the GR:AW demo shows up.

The Outfit demo to hit Live this weekend

According to IGN, the demo for THQ's The Outfit has been certified by Microsoft and should hit the Live Marketplace today...or tomorrow..or the next day. Either way, downloaders will be  pleased to discover that it's the first 360 demo to be fully playable online.

Frustrated with another WWII themed 360 titles lackluster online play? In a couple short weeks, THQ will release a multiplayer demo for their upcoming 360 dubya-dubya-eye-eye title, The Outfit. The 500MB demo will support up to 8 players and will be available March 3rd in the XBLM and bundled in the Official Xbox Magazine. 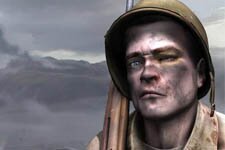 GamersReports has an interesting release update from Gamestop. In it are some updates to noteworthy titles you may have been eyeing. However, one of the most intriguing bits comes from the listing of Medal of Honor: Airborne for Xbox 360. With a PS3 version planned, this definitely strikes some interest. Other titles include Fight Night Round 3, which has a date of Feb 14th and Topspin 2, which is slated for April 3rd. And The Outfit has a date for March 13th as well.