Sure, Saints Row is full of thugged out gangsta' pimps, but it's full of something else, too: bugs. Cabel, a man known for his DS review videos, has put together something very special to commemorate these bugs. Along with a friend, he's put together a musical, Buggy Saints Row. Well, it's really more like three vignettes, but it's still funny. With songs like "Where's my F*cking Car," you really can't miss. So, sit back, relax, and enjoy the softer side of Saints Row.

Follow the "read" link for Cabel's thoughts and a higher quality video.

Just to put everyone in the holiday spirit, Volition has rolled out some new content for Saints Row. Download the "Ho Ho Ho Pack" from Marketplace for access to a brand new Santa suit. We suggest you reenact the movie Bad Santa to your heart's content. Have your character drink himself silly, mistreat a few prostitutes, and go on a shooting spree. Is there any better way to spread holiday cheer? We submit that there is not. Merry Christmas, everyone!*

[Thanks, Jay sheffield. Image via b3ta.com]

Saints Row: Pimps up, patch down

Despite widespread reports that a release was imminent, the long-awaited Saints Row patch is still a no-show as of 4am October 31 and -- as you might expect -- the pimps are getting restless. Do you think trying to issue an update in the same window as the Fall Feature-for-All might have been a bad idea?

People have been complaining about Saints Row multiplayer for a long time. Good news, it may be time to fire up Saints Row again, as Volition has finally released a patch. The patch fixes and updates a number of both single player and multiplayer issues. It does enough things that we won't bother to list them all here. Besides, we're pretty sure that most of you just want to know if the lag has been fixed. Supposedly, the patch will help out in the lag department, though we are unable to confirm this. Anybody out there gotten the patch yet? Are things running more smoothly? Leave some comments and let fellow thugz know what's up.

I heard you got the fever for the flavor ... of THQ's licensed music. Here's the full list of the songs you'll do drive-bys to Saints Row, including such classics as Wagner's Twilight of the Gods and Seventeen by Winger. There's alot of obscure stuff here -- maybe too obscure -- and it lacks a cohesive theme like Vice City and San Andreas. However, I can tell you that the Black Sheep track that opens up the demo brought back some cherished white suburban wannabe rapper memories.

If your world view is obstructed by the rock under which you live, you may not have noticed that a demo for Saints Row has hit Marketplace. Go get it and tell us what you think.

On a side note, posts might be a little wonky for a while, as technical difficulties (my Evil Office Webfilter ®) prevent more timely posts. Please bear with us as we get back up to speed. Of course, if you don't live in America, the posts might actually be more timely.

Anywho, grab the Saints Row demo and tell us how Krunk it is.

[Thanks to everyone who sent this in]

Down under Saints Row playtest

Our Aussie friends at My360.com.au got a chance to playtest a near final build of Saints Row. In short, it sounds like great fun.

"Gamers will be pleased to know that Saints Row, from what we saw from the preview code, is far from a GTA-clone. It offers so much more in terms of customization and interaction that it really makes a run for the best GTA-type game out there, considering GTA is pretty much a genre in itself."

Some of the high points: The multiplayer modes in particular sound very cool. Big Ass Chains mode has players killing each other and then stealing the bling off of the bodies. Take the bling to a jewelry store, fence it, and get money. The first team to a certain score is the winner. But the best of all modes has to be Protect the Pimp. I'll leave it to you to figure out the objective, but this is the important part: the pimp is controllable and has the "Bitch Slap" ability, which is a one hit kill. That's got to be the best idea ever. 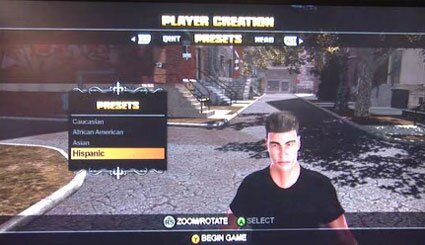 There's some good E3 footage of Saints Row available for those of you wishing to get a taste of GTA on steroids. The similarities between the two are evident, but this title takes some of those elements and ups the ante. If you want to check out the impressions from the show floor, go here.

In a Q&A session with MSXBOX-World.com, Jacques Hennequet of Volition confirmed that there will be a demo for Saints Row on the way. When asked about the possibility of seeing it on Live, he stated, "Absolutely. Stay tuned for the date and the contents. It will be a very large demo."

So there it is folks. This GTA look-alike will be in your hands before you know it. Gangs, guns and girls: it's next-gen mayhem for the thugs at heart.