Follow the big money before it goes public: BloggingBuyouts.com | Add to My AOL, MyYahoo, Google, Bloglines 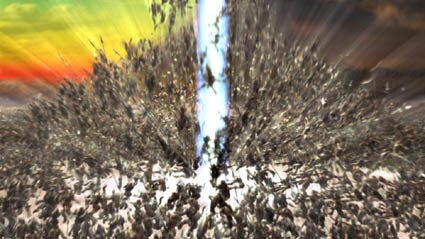 If you don't have an HDD and you were looking forward to Ninety-Nine Nights, you'd better start saving. QJ reports that Ninety-Nine Nights, releasing this August in the US, will require a hard drive to play. At least that's the story according to Xbox.com. Personally, I find this a little suspect. Surely something like this would have been covered when the game released in Japan.

Assuming it's true, without an HDD it's going to cost you at least $160 to play this. Ouch. Of course, you could just skip Ninety-Nine Nights entirely, because it's not supposed to be very good anyway.

See an image of the Xbox.com product info after the break.

1. Erm didn't MS say that every game would be playable on core consoles?

What a stupid idea having two versions was...

2. I'm pretty sure that all 360's cane with a HD.... I might be wrong on that one, but I seem to remember hearing that they didn't release the Core system out there.

3. In Japan no 360's without an HD were released indeed. In Canada, where the article links to, they were, but the entry is false, because US, Dutch and Japanese versions don't list the requirement. It's just a screwup in the Canadian version of the site, just like the SF2 release date.

4. THe core pack never come out in japan!!
And this game was.nt goin to even come out heer so be happy you guys are even goin to get to play it

AS for all games bein played on the core pack
Football Manager 2006 on xbox360 ..can,t be played with a Hard-drive

As far as I know, FFXI is the only 360 game that has this requirement...for now anyway.

7. If a developer absolutely needs the HD, I'd rather they made it a requirement rather than dumb down gameplay. But of course I already have the 360 premium so no big deal for me.

8. Certain types of games need to deal with large amounts of user generated data quickly, so a hard drive is essential. How Ninety-Nine Nights would fall into that category isn't clear.

Try to be less whiney. Having two SKUs, with and without hard drive, makes complete sense. It isn't a onerous burden to design a game so that it runs entirely from DVD and uses the hard drive for improved performance if detected. The original Xbox could have been more price competitive if they'd done a similar thing. So long as the hard drive was available and supported from launch, unlike the PS2 HDD Kit, it would have made some difference in cutting costs, especially for an audience that frequently diudn't appreciate the hard drive's value.

Allowing for a lower price point means a lot for reaching the maximum number of potential buyers, especially as the original Xbox drains out of retail availability and the market focus shifts more to next gens as the other two platforms launch. Having a small handful of games that require an optional accessory is not a big deal. They will remain a minority of titles and not cause a lot of upset so long as their requirements are plainly indicated on the package. It's little different than a game requiring a special controller or input device like the EyeToy, GunCon, etc.

The idea works fine for me. Since I don't care about wireless controllers, getting the Core System and waiting for a better price or price/capacity on the hard drive may be the route I choose. A lot also depends on what price MS chooses for the 256 MB memory unit. If the 64 MB version goes down to around $20, then the Core System becomes more usable rather than having only a $60 difference in price from the hard drive equipped model after it is equipped for saving data.

I'd like it if they had a third SKU. If I could have the hard drive and one wired controller for $350 or less, that would be the one for me. As I said, wireless controllers just don't matter to me. For the foreseeable future I'd be using the machine at close quarters with a relatively small screen, less than 30". If I move to roomier quarters where a big screen can be accommodated, I can alway add the wireless controllers then. Until then, I'd rather not spend the money to eliminate such a short length of cable.

9. The fact that it needs a hard drive is a good thing. That means, like Oblivion, it will be able to have better graphics and more units on the screen and such because it will cache things in the hard drive. And anyone with intelligence probably bought the premium package anyway.

I don't even understand why anybody bought the core system. For the premium system, you pay $100 extra but if you add up everything you get way more than $100 of stuff. The hard drive alone costs $100, plus you get an XBL headset and a wireless controller.

So for all you n00bs who bought the core system, it was your fault you didn't get the HDD when you got the chance.

How do I figure? First you have to subtract a $40 wired controller from the $300 dollar core system, which leaves you with $260. Now you add the extras of the premium and you are not getting as much of a deal as you think!

11. It's a shame that one of the few Japanese games for the 360 is mediocre. I'm still waiting for the full version of Lost Planet which looks and plays awesome (but somehow, I feel like I've played similar games before), and anything on Dead Rising or Sakaguchi.

It was a mistake indeed to make a version without hard drive. Also, 13 GB is too little. I only have 3 GB left and haven't put my music in it!! I feel ripped off. When is Microsoft going to launch a bigger (and cheap(er)) hard drive anyway?

And why can't I watch WMV or MPEG videos (i.e. not DVDs) from a disc but I can watch images and listen to music? Microsoft needs to release another patch.

If Microsoft had released the console with a much bigger hard drive (500 GB or so) it would have sufficed to be used for games (even storing full DVD games, and eliminating the HD-DVD or not problem), store a lot of multimedia, and so on. :(

12. You're not supposed to put your music on your Xbox, or any of your media for that matter. That's what the iPod and Media Center compatibilities are for.

And 500GB is way too much. All they need is a good 100GB and it would be more than enough.