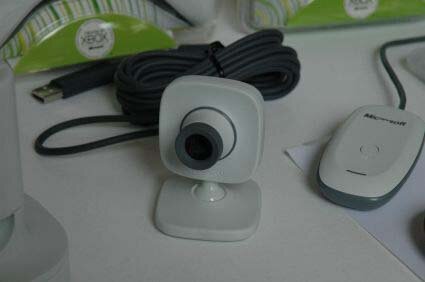 Joystiq has learned the "unofficial" price point for the Xbox Live Vision Camera:  $39.99 bundled with Uno and one month of XBL Gold. It's not clear if those of us who already spent our hard-earned MS Points on Uno will get the opportunity to buy either a less expensive un-bundled version or another camera-enabled game. I'm guessing we're out of luck.

The 'stiq also has info on various other "Holiday 2006" peripherals:
The upcoming wireless racing wheel previously reported at $130 isn't on the list, indicating MS is re-evaluating that price.

Back to the camera. Is this price point and bundle pretty much what you expected? Furthermore, is $40 a small price to pay for the chance to see how ugly the strangers on your friend's list really are?

At $40, I wouldn't be surprised to see everyone sporting one. However at $40, can the cam really be as good as they say?

Does anyone think that maybe GR:AW could release a update that would allow you to use the camera in MP? The box up in the corner is perfect for it, and it would be cool to be able to switch between player while playing. Just a thought...

Ideally it would come with a choice of a live arcade title with camera support (e.g. poker). As it stands this is still a great price and a whole lot cheaper than the purported $60 pricepoint of the wireless headset...It's also nice it pulls double duty as a Windows-compatible camera, although the lack of a built-in mic kind of hampers that. I'm also suprised MS hasn't released more specs about the camera, as I'd like to see how the resolution compares to something like the iSight.

I'm also hoping this 400 point XBLA price continues. It's affordable and very attractive as an impulse buy compared to 800-1200+ pts.

I'm guessing that they may also sell an 'unbundled' version for $29.99 that doesn't include UNO or the free month of Xbox Live Gold.

$40?! That's hella cheap, damn! I'll prolly never buy it but that's still quite the deal unless the cam is shit, which it prolly is. I just paid $90 for a webcam so this thing can't be too fabulous, right?

I won't be buying the camera if you can only get it with Uno. I already spent my 400 points on Uno, and I won't buy it again.

The camera price point is reasonable.

I would have expected the steering wheel to come in under $100. Having a premium and entry level wheel might be an option, but just having single expensive wheel probably isn't going to work.

Actually, I would, personally, like to see how attractive some of the strangers on my friends list are. There are quite a few girls on my friend's list who SOUND beautiful, the question is whether or not they have a face made for radio or not.

I don't know if I feel screwed b/c I payed for a $5 and got it and played it for six months before the people who are getting it free with a peripheral. It'd be nice to get Microsoft points instead, but I'm not going to feel ripped off if I don't. It's $5. If I feel that badly about it, I'll just buy the thing on sale or wait for a price drop.

The crazy price for a memory unit is silly, though, particularly when I can't copy my saved game from Microsoft's first party title Perfect Dark Zero so that I can take my stats to a friend's house.

$40 for a camera with a game I already own? Yeah, I'm not feeling the love.

Would I be interested in buying a camera for the 360? Sure!

Would I be interested in buying the same game twice? NO! Sorta sours the deal for me.

But if I have to buy UNO again, count me out.

I don't mind paying again. The way I look at it was kinda the same way about the halo 2 maps. You had to pay to get them early. I know its not the same situation, but you get the point.

I will be getting this when it releases, along with the wireless headset.

seeing as how the price point of the camera bundle is so reasonable, if i had previously paid for UNO, i wouldn't care. However, in the future with bundles, which include an arcade game, it would actually be nice to choose. Seeing as how I can just download it.
One man's XBL Arcade game fav. is another man's garbage.

i was expecting somewhere in the $79-99 U.S. range for the camera, bundled.

$40 for cheap ass camera, i dont think so

Wow. I was thinking the camera would cost about $100. I am actually very surprised that it is so cheap.

I don't care about any of that stuff.

#7. What do you mean you can't copy the stuff from your memory card to perfect dark? I've never tried but I'm guessing you're saying that there's no way to do so. That sucks. I'll still be getting the 256 because 64 is small as crap and 256 can fit A LOT more stuff. I mean videos mostly are what I'm talking about.

Also, I've heard that the camera is great quality. The framerate is smooth and it's just a really good product. I mean dont let the price throw you off. Look at the 360 itself. 300-400 dollars is cheap considering that if you want to get the same graphics for a computer you're paying a lot more than the 360.

Number 12, you're getting the tv shows, movies, I doubt. The bigger HD is coming to. I just hope theres a way to tranfer my stuff from my old HD to the new bigger one. Otherwise, switching HD's all the damn time is gonna be a pain in the ASS

Yeah, Jeff. With Perfect Dark, you can't copy your saved game from the hard drive to a memory unit or vice versa. Once you've created a game on a storage device, it's stuck there.

I would think that copying game saves would be a standard feature for all 360 titles, but not in this case. (Note: It's possible that the PDZ software patch remedied this; I haven't tried it again since the initial time it didn't work.)

I really only use the memory unit to take my gamer profile with me anyway, though, so I guess it's not the biggest deal.

In my humble opinion this offers sucks. I'll wait till some real prepositions from Microsoft

Yeah, I'm not getting why everyone thinks the camera should have cost more. You can pickup a webcam for $20-30. The more expensive webcams have auto focus, auto tracking, and software to manipulate your video-- none of which I heard is coming with the 360 camera.

Sucks that you have to buy UNO again.