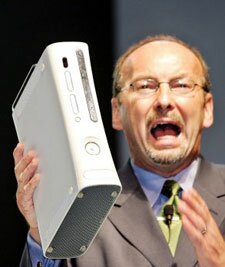 With the looming launch of the PS3, it's always fun to get a reaction from the front-liners on the other side. Peter Moore sat down with Eurogamer the other day and spilled his thoughts on Sony and their new controller.

"At Microsoft we did the same controller six years ago ... The gamers' response was muted at best," he said. He went on to speak about how the applications for such a controller were fairly narrow. And with the sacrifice of the force feedback, there's a strong argument that the PS3 controller will have lost much of its allure. Regardless, the gamers will be the ones who decide what works and what doesn't come November.

Mr. Moore's comment about the price point summed it up: "I can only imagine what's going on back home for 599 Euros for what looks to me like a platform that's on a par at best with some of the software we're showing."

1. To me, Peter moore seems like a very down-to-earth person, the same of which cannot be said about Sony's Ken Kutigari.

I agree with Moore's assesment of the immersion tech in the ps3. Since I'll be getting the wii, I don't believe I'll be looking for that alot in the ps3.

Expecially when it comes at the cost of losing rumble tech (according to sony). I personally like the rumble-it adds to the gameplay. Playing a game without rumble seems archaic.

2. I agree with Peter Moore. I think a lot of people in the industry must be shaking their heads after the E3 Sony press conference. They just seemed to make some moves that just don't make alot of sense.

You know the price point is too high when that ends up being topic #1 when anyone discusses the PS3.

The controller? Very risky. People LOVE their controllers. They do not like them messed with. Yes, the Wii has messed with their controller, but they have gone out and made out of this world changes, and it's either going to be a huge hit, or a huge bust.

I think MS left E3 feeling like they might have dodged a bullet. They must have felt great whereas, Sony must have left there feeling a little uneasy about what just took place. And most would have thought the tables would have been turned.

3. I think force feedback was removed due to a patent lawsuit on the technology.

Microsoft got abused for it's price, somehow I think PS3 fanboys are going to rant about "it costs twice as much, it's twice as better".

4. Hmm, maybe I'm some sort of black sheep when it comes to rumble. Personally, I really don't care either way. Sure, it's nice to feel it when you get whacked with a blunt object, but I'd rather just not get hit with it in the first place, you know?

Besides, I got used to the Wavebird for Gamecube, which doesn't have rumble. Even going back to normal, rumbling controllers felt wierd. Oh well... To each their own.