Before you ask, yes, we are angry that Joystiq stole our idea for this week's new games post. We're trying to manage our anger though, so we've been screaming into a pillow for the last three hours. Thankfully the Fancast has already been recorded, so our pristine voices remain intact. Anywho, we are faced with yet another week of incredible games. Rock Band is finally here, as is Mass Effect. You can even nab Avatar and snag 1000 gamerscore in minutes. If that's not something to be thankful for, we don't know what is. Behold this week's releases below.
If you've got the scratch, we suggest that you go forth and rock. Who knows, maybe you can even get your family to join in during Thanksgiving dinner.

Update: After doing a little digging, we've uncovered the source of this story. Tanaka's comments come from an interview with Pro-G, so it looks like the upcoming 360 MMORPG from Square-Enix is the real deal, folks.

Say it with us now: "whaaaaa?" Coming from our friends at Xboxygen (they're like, totally French), is a dandy of a rumor: Square-Enix is currently developing an MMORPG for the Xbox 360 and Windows Vista. Perhaps the most interesting part of the rumor, the game may not make it to the PS3 at all. Hiromichi Tanaka, director and executive producer of Final Fantasy III for the DS, reportedly made this announcement in a recent interview: "We're working on a next generation MMORPG for the Xbox 360 and Vista but a version for the PS3 is possible."

Assuming this is true, we can only guess as to what the MMO will be. Considering that Final Fantasy XI is already available for the 360, it's not too much of a stretch to assume it might get a sequel. Still, the important thing is that Microsoft may be getting more Square-Enix love in the near future. Could a legitimate Final Fantasy be in the works as well? We can dream, can't we?

PlayOnline has announced that Xbox Live servers will be down on June 27th from 2:00 'til 6:00 PDT for maintenance. It looks like this will only affect PlayOnline, but it might mean no Live for anyone. No word has actually come down from Microsoft about Live being down so, who knows?

The announcement mentions that those already connected to PlayOnline will stay connected, but once you disconnect you won't be able to access PlayOnine until the maintenance is finished. So, 360 Final Fantasy XI fans (both of you) better connect now before it's too late.

Update: Reader bigC24 let us know that the Live outage is official. Check out Major Nelson for details. 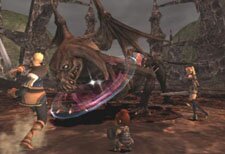 FFXI beta testing has begun and they need some eager testers to run it through its paces. Readers of the Official Xbox Magazine know what's going on: all you have to do is go purchase the latest issue to find the beta disc. Lucky for us Square Enix is prepared, with enough to go around for each magazine copy.

Everyone will be in the same boat as a separate server is available for the beta test. So if you're an Xbox 360 owner in North America, Japan or Europe, check out the site to receive a registration code.