Alan Wake, Fable 2 and others will release in 2008

Something we forgot to mention that was included in Dan Mattrick's ever enjoyable memo was the fact that, for the first time ever, a few Xbox 360 games have been confirmed for a 2008 release.

Nestled towards the bottom of Mattrick's memo he lists a few games that'll release in 2008 including the not so canceled Alan Wake and Fable 2 as well as Too Human, Halo Wars, Splinter Cell: Conviction and "several exciting yet-to-be-announced titles". Wait, did you get that? Alan Wake is no longer rumored, but is now confirmed for release this year! Double w00t, w00t to that! But don't get us wrong. We're totally happy to hear Fable 2, Too Human and the others are also confirmed for release this year, it's just that we've been in an Alan Wake drought as of late and hearing that it hasn't turned into vaporware makes us giddy. Anyhoo, it's nice to see some of the our 2008 game release predictions coming true and know that we won't be in a gaming slump after last year's amazing lineup. It's time to get your pre-orders lined up fanboys, because this year is going to be grreat!

Speaking to Game Informer, head of Microsoft Game Studios, Shane Kim, has a lot to say about the current state of the Xbox. The main focuses of the interview are Microsoft's 2008 lineup, the 360's performance in Japan, and the Games for Windows brand. Of particular interest is the discussion on games likely to be released in 2008. Microsoft's E3 keynote focused only on 2007. Addressing the question of 2008 and games like Alan Wake, Too Human, and Fable 2, Kim notes that these titles are not "way out in the future" and that Microsoft would not be talking about them if they were. Kim also tantalizingly applied this reasoning to Peter Jackson's Halo project.

Another of the more bizarre moments of the interview occurred during the discussion on Microsoft's performance in Japan. According to Kim, Resident Evil 5 for the Xbox 360 was supposed to be "the big announcement." We're a little puzzled by this -- as was Game Informer -- considering the game was announced for PS3 and 360 just over two years ago. Read the full interview after the jump.

Samuli Syvahuoko, the former co-founder of Remedy Entertainment -- the studio behind Max Payne and the upcoming Alan Wake -- has formed a new game company by the name of Recoil Games in Helsinki, Finland. With veterans from companies like Ubisoft, Guerilla Games, Electronic Arts and Codemasters, Recoil Games hopes to create hit games that will reach worldwide recognition, no small task. The company is currently working on an original IP inspired by classic disaster movies. The game uses a combination of in-house technology and 3rd party tools. The first Recoil Games project, still untitled at this point, should hit the Xbox 360, Playstation 3, and PC sometime in the near future.

There were a couple new screenshots of Remedy's Alan Wake released, along with some new info. The psychological thriller's gameplay is going to be dependent on the weather and time of day, as the nightmarish creatures you face off against grow more powerful in the shadows. Coupled with the fact that the hours of daylight per day diminishes over time, so you're going to have to make use of your own light sources to help fend off baddies. The game is touted as being hyper-realistic, but so far the latest screenshots don't exactly hold up to that statement. You can be the judge after the break.

It looks like the long awaited Remedy title, Alan Wake, is about to become even longer awaited. TVG is reporting that the latest issue of OXM declares that Alan Wake won't hit retail shelves until 2008. The news is sure to upset all the fans who have received only occasional scraps about the game since it was first announced. It's really a shame, too, because the 360 is extremely short on survival horror titles. Here's hoping we see Silent Hill 5 before 2008.

Are you looking forward to Alan Wake even though we know next to nothing about it?

Admittedly, we know very little about Remedy's Alan Wake. Officially, all we have to go on is the trailer that was released at E3, some screenshots, and its designation as a "psychological action thriller." Do we have new information today? No, but we do have three more screenshots. In fact, if you look closely at the screenshot above, we can actually confirm one new feature in Alan Wake: driving! Yup, the above screen shows all the right signs that the main character is, in fact, driving a car. Oh the possibilities! Sarcasm aside, we're really curious about Alan Wake, so we'll take what we can get. See the new shots (and the old shots) at the official site.

With the recent release of Gears of War you may be asking yourself, "man this game roxorz, but what other games can I look forward to in 2007?" It's okay my friend we're here to enlighten you, because About.com compiled a nice list of the most anticipated Xbox 360 games dropping in 2007. I'm already saving up for games like BioShock, Lost Planet, Halo 3 (duh), Alan Wake, Too Human, Assassin's Creed, and Guitar Hero II. I'm going to shed a tear ... just look at what we'll be playing in 2007.

New Alan Wake info to be revealed at X06

Yeah, we know. It's not exactly a news flash that developers will be revealing new info about their games at X06, but we're particularly interested in Alan Wake, Remedy's take on Stephen King style horror. In a recent forum post at the Alan Wake website, Remedy staff member, SamivRMD, posted the following: 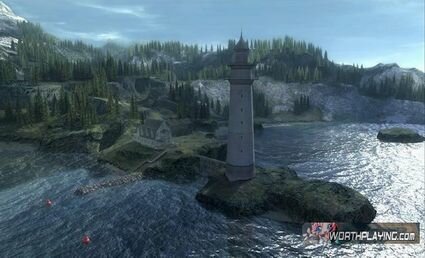 Worthplaying has posted some Stephen King style screens of Remedy's upcoming author simulator, Alan Wake. The screens showcase the game's creepy seaside town, complete with lighthouse and questionable bridge construction. A game about a sleepless horror writer getting a taste of his own fiction, Alan Wake is currently one of the more interesting titles on the way to 360. Hit the read link for more screens.

Screenshots of Alan Wake will keep you up

A forum poster at PlayStation.com stumbled upon these screenshots of the upcoming next-gen title Alan Wake, being developed by Remedy. Alan Wake is a psychological (not physiological) thriller about an insomniac horror writer living in a small town in the Pacific Northwest. IGN says "the game features a massive, open world for the players to explore, with mission based exploration in the single player adventure." This is looking like it's still a ways off, but the screens sure are pretty.