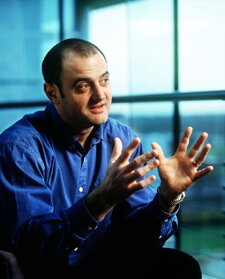 In an interview with Germany's Spiegel Online, Microsoft's executive in charge of the European market for the company's Xbox gaming consoles, Chris Lewis, talks about the Xbox 360, HD-DVD and, of course, Blu-ray.

When asked about the anticipated HD-DVD player add-on, Lewis says, "We'll say a little bit more about it at E3. It will give people access to HD DVD." When asked about the console's omission of HDMI, and its possible inclusion in whatever form the add-on takes, he said, "All I can say to you is -- there are interesting developments in the pipeline. We will make sure that the HD-DVD-peripheral device will meet all the requirements for consumers to enjoy high-definition DVD playback."

What does he think if Sony's competing Blu-ray format? "Blu-ray right now reminds us of another technology from Sony: Betamax." Oh schnap! Sony does have a long list of failed proprietary formats, not the least of which is the currently floundering UMD format used in the PSP. Will consumers pony up for HD movie capabilities in their console, or is it really all about choice?

1. Haha .. a next gen system (xbox360) with TWO (2) optical drives ... which are basically identical except that one reads HD-DVD movies. Does that sound rational? Don't they know that add-ons have never succeeded?

2. Not to mention memory stick, minidisc (and ATRAC), and SACD.

Actually, lets not mention SACD, because the way that the upcoming high def DVD format war is looking like SACD vs DVD-A is making me a little sad. "A strange game. The only winning move is not to play. How about a nice game of chess?"

3. Whether Bluray or HD-DVD, both are a scam. Both offer a marginally sharper picture than an upscaled DVD...even on a big television (according to some comments from the trade shows).

As far as space...it amazes me that our movie studios are so uptight that they don't go with EVD discs....HD red-laser discs with a possible 50GB of storage with a cheap $150 player....what's not right about this picture?

The world will be better with just DVD for now. HD is great for games, but offers nothing for movies except to those wacko video elitists that notice a 1 pixel difference.

4. Yeah, I might get the HDVD addon if it isnt priced to bad. But no I rather play some Thermal Nuclear War

5. Jeez, enough with the "Don't they know add-ons never succeeded?" line? Who really thought Sony, a home electronics company, would be successful at making a game machine solely to spite Nintendo? And what makes one product an add-on and another a "peripheral?" Eyetoy and Guitar Hero are huge sellers. But aren't they "Add-ons?" How about a rational argument regarding the HD DVD. Personally, if that add-on drive is no more than $200, I'll be all over it. For $600, I get my gaming machine with HD video playback. And if MS drops the 360 price in November when the PS3 comes out, the 360+HD DVD could be cheaper than PS3. Lots of ifs, but still, I'd rather drop $200 on an add on then buy a stand alone player for $500 (HD DVD) or $700-$800 (Blu-Ray).

6. At least Xbox 360 owners are getting a choice as to whether they want HD-DVD as an add-on instead of being force fed Blu-Ray. Sony's jumping the gun on Blu-Ray; as of now there isn't a lot of use for it among average gamers, computer users or movie watchers. What good is having a blu-ray player in your PS3 if you don't have any blu-ray movies to watch? How much will this new format cost us? Or are they gonna force blu-ray movies on us coinciding with the PS3 release? If so, apparently they have not learned anything from the utter failure of UMDs

7. This add-on will have to come cheap if MSFT wants to try to win the war with Sony. Consider this, if this add-on is expensive, then consumers who own 360, WILL debate on whether to get the HD DVD or Blu-Ray if they choose to buy a player. MSFT won't gamble to lose customers, they have no choice but to interest us 360 users to buy this add-on, or they will lose this war. Blu-ray already have won the first battle by having more movie studios backing them up than MSFT, but there is no exclusive contract to anyone, so studios can switch over for the right reasons.

What I want to see is whether HDMI will be the only output supported. As most consumers, not all HD TV's that have been sold support HDMI, earlier versions only support Component with some having DVI. There is a converter for DVI to HDMI, but again, an extra expense to have one of these players.

Word out there is that LG Electronics will try to come out with a player that supports both HD DVD and Blu-Ray, this will be the safest choice if true. I was a Beta supporter until VHS won the war. Wont get caught a 2nd time.

8. Is that all but confirmation there will be a HDMI output released for the 360?

9. #6 ... I'm hoping rather that it means that Studios will choose to not cripple playback through components and allow for full resolution HD sans HDMI.

10. #5. Blu-Ray vs. HD-DVD has nothing to do with Sony vs. Microsoft. Microsoft has no real stake in HD-DVD. Sony, however, does have a huge stake in Blu-Ray, which is why it is force-feeding it to every PS3 owner.

Microsoft may sell a bunch of HD-DVD drives or it might not. Either way, it's not going to hurt them. Why would it?

11. There are rumors already starting that a HD-DVD drive could be as little as $100.

12. I hear ya Alex. I know that Blu-ray is Sony's trojan horse to try to sell us more crap we don't need. With the current price of blu-ray components I was just saying, why now (now, being november or whenever the PS3 is released)? HD-TVs are just coming into their own and the need for a newer media format just isn't there. Just from a common sense perspective, if the isn't a demand for it, even for the uber tech geeks with deep pockets, why? I understand that they want us as comsumer to feel like it's a must have but at blu-ray's current price it just doesn't seem very smart.

13. If it is $100, I will definately buy it. But it all depends on the quality of the product, as I was appalled by the DVD player in the 360. The most important thing for me will be the way framerate conversions are handled from 24p into 50i, 60i, 60p and so on.

As of right now the HD content provided by MS hasn't been impressive in those regards. I want my video SMOOTH, dammit.

15. The real question is - how is this thing going to attach to 360? It can't be SATA since the only user accessible port is for the hard drive and that only provides for one device. So, USB? seriously?

16. iHave to say it will attach to the USB. Having it attach to the SATA drive could be unsightly. They'll probably need to release an X360 branded USB hub for those who use the Wifi adapter.

18. With the size of the current video connector cable on the X360, I would guess that all the connections will take place there.

I think the video port on the back has more than just audio/video out. I bet there is a system main bus connection there as well.

19. I cannot imagine why anyone would think USB 2.0, with a raw transfer rate of 480 Megabits per second, wasn't adequate for the transfer rate of HD-DVD. Even running movie playback simultaneously with full rate g or b WiFi wouldn't come close to straining the capacity of the bus. The HD-DVD data rate for movie playback is well under 50 Mbs.

The Plug and Charge connections use a miniscule data rate and would barely affect the overall bus throughput.

It's possible that background downloading would eventually become available during movie playback, and that would enlist both the drive and the WiFi simulataneously but any greater load seems very improbable. What more would anyone be doing on their console all at once?

Compared to providing decent hard drive throughput, which USB 2.0 doesquite readily, offer the bandwidth for a HD-DVD data stream is not a big deal. I typically burn DVDs on an external USB DVD-/+R drive at much higher rates.

Enabling HDMI connections is the real question. If it cannot be done on the Xbox 360's video port, this becomes a sticky problem. Putting the HDMI port on the drive itself makes things pretty ugly. It also means sending the HD-DVD stream to the Xbox for decoding and then sending the decompressed stream back to the drive for output to the display. That uncompressed stream represents a big piracy risk that send the studios into conniption fits. Doing the decompression in the drive would mean a lot of added cost, making the value of the add-on drive compared to a dedicated HD-DVD deck questionable.

As for running out of ports, the drive could easily include a USB 2.0 hub without a severe cost addition.

Connecting the drive and having enough ports to go around is no problem. Doing it for an attractive price in a way that will pass the licensing requirements is the challenge.

20. Ah, the Betamax argument! How clever!

Betamax came in a smaller form and had higher resolution than VHS, but lost the consumer mindspace war. So now we have Blu-Ray, which can double and quadruple the size of HD-DVD but which has a name nobody shopping at Wal-Mart can understand.