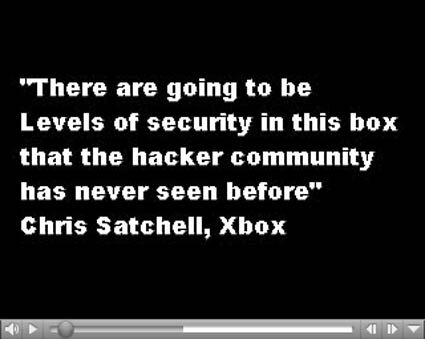 Not that it does us any good, but consider the 360 officially hacked. After "months of hard work," a team of hackers from have released video (also here) of a back-up copy of PGR3 running on an Xbox 360 with reprogrammed DVD drive firmware. This comes on the heels of the FW security details being posted on XboxHacker.net. The "new" firmware, which requires a hardware reprogrammer to install, will boot any properly formatted disc with matching CR be data, but does not circumvent region encoding.

As explained earlier, the security flaw that allows this is really in the hardware design, so it looks like hackers are in control of the cat/mouse game from now on, even if MS forces an update via XBL. But don't expect it to show up on Xbins any time soon. TheSpecialist explains the group's noble intentions:

There are no plans to make some kind of tutorial for n00bs. Intention of this site is to get an understanding of how the 360 is protected, not to enable n00bs playing backups.

They hack because they care.

Get a f**king life you idiots! Hip hip hooray! The 360 is hacked! Make way for waves and waves of morons (much like these ones) who will take these modded units online to ruin everyone elses experience. Good job you worthless turds.

Perhaps you're the useless turd Lino? This hack hasn't been released for the masses of idiots and should only allow unmodified DVDs to run. I hate how there are 100,000s of anti-hacking fuckwits who don't even understand the point of it.

Something about this video smells fishy to me. From the time the system is turned on to the time the 360 logo leaves the screen is longer than the real deal. Of course that's assuming that what we see on the TV is coming from the 360 shown. There could be one hooked up to the back that the cameraman turns on as he pans from the exposed 360 to the TV. Maybe they don't want to release it to the public because they don't actually have a working hack. They're just faking it all. Just throwin that out there.

#5, that's exactly what I was thinking. The video could easily been faked. The TV could have a second 360 hooked up to the video inputs in the back and the TV is currently displaying the video from the rear video inputs and not the front.

like #5 and #6, this video prooves absolutely NOTHING, they could be faking the entire thing. After the whole iPod video incident, its hard to believe anything these days.

Yup, that video proves absolutely nothing.

It proves the guy is a moron for leaving a real copy of PGR3 on top of the frigging CPU heatsink.

This is for real, it was posted on Xbox - Scene, one of the most reliable and most wary when posting any information about possible breakthroughs in X360 modifications. The guy who figured this out also figured out how to run burnt games on the original Xbox without modding it at ALL! But he never released it because of the possible reprecussions, (hacking on Halo 2 without being banned, being that your booting from the disc modders could mod on disc maps) Shut your mouth if your not informed about these things.

Very interesting. It'd be nice to see them do a '360' around the TV to show nothing else is connected to verify it being authentic.

Even if it is real... no big deal other than the gratification of knowing they have done what they set out to do. Kudos for smart people ;) Maybe MS will hire them.

I really don't need to explain it really, you can check it out yourself, it's quite clearly faked.

Why don't they release it so others can "learn" about how the 360 is protected? Or so others can verify that it works. Agreed, this video proves nothing, it can be easily faked.