Score a touchdown...for the planet! 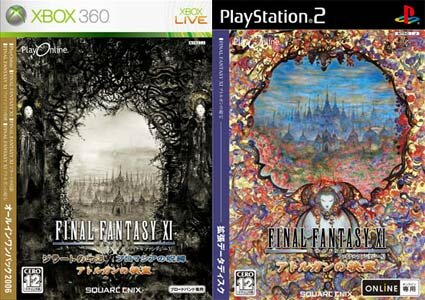 The boxart is created by longtime Final Fantasy artist Yoshitaka Amano, and features two different themes: "Blessed Radiance" and "Blighted Gloom," both the names of quests from the current Chains of Promathia expansion. Final Fantasy XI hits the 360 on April 18th.

I have a few questions for anyone who has played this game:

1. How involved is it? Can I get buy on an hour or two everyday (with more on the weekends)?

1. FFXI is extremely involving. The leveling aspect of the game is atrociously,aggravatingly,tortuously addicting if you're into that sort of thing. I have played the game since the PS2 launch in NA in the last two years, I have gotten to level 50...out of a possible 75 levels.

2.It costs 12.95 per month and one dollar more per each additional character. You also get the first 30 days for free.

3. In my own opinion? Yes. I love FFXI. I love the final fantasy series in general. The game has it's faults, but the community and the world itself is what keeps me coming back. If you still have some time...grab a copy of the beta and give it a shot, it's really the only way you'll know if you like it or not.

If you have any questions...feel free to ring me up. My gamertag is BXKnyght

Not that I care all that much but is anyone else bothered by Sony's "Play Online" logo being on the XBox360 box?
(upper right just beneath the xbox360 top banner)

I don't think an online capable PS2 game would ever be released with the 'XBOX LIVE" logo on its cover either.....

Good eye. I think the service is built on Sony's service, so it's probably jumping through Live (ala EA) to get access. Not sure about this though.