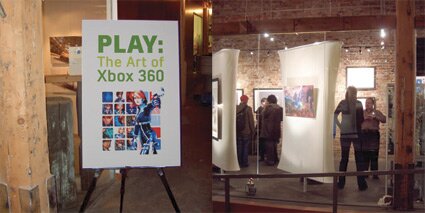 Geoff Martin heeded our call for pics from the "Art of Xbox 360" gallery show being held in Toronto's Blue Dot Gallery, except he did one better. He linked us to a piece he wrote for canada.com, slideshow included! He writes, "Wil Overton, an artist from UK-based Rare Games, and the lead concept artist for the Xbox 360’s Perfect Dark Zero, also doesn’t have much time for quibbling over definitions, or debates on what should or shouldn’t be considered 'art.' He said at the opening of "Play: The Art of the Xbox 360" on Thursday that he's thrilled to see his work hung on the walls of an art gallery."

On the other side of the net, Tony Walsh from Clickable Culture says, "If you happen to be at the Distillery this weekend, it couldn't hurt to drop by the Blue Dot Gallery to have a look, but I wouldn't recommend making a special trip just for the show. I think what we have here is a classic "post-release attention-span" grabber, geared towards retaining a semblance of public interest in the Xbox 360--in other words, this event isn't so much about art as it is about commerce."

Having not seen the show, I can only speculate, but I think Walsh's take sounds about right, but was their any doubt? All the games are published by Microsoft, and the show was advertised as being "Xbox 360" specific. We could also get into an argument about semantics--aren't many gallery shows about commerce and art?--though, this case takes that observation to an extreme, replacing enterprising artists with a Fortune 500 company.

Also found another gallery of images from photojunkie (via Flickr): Play: The Next Level of Gaming.

UPDATE: 360 Fanboy reader Zoltan posted his own review of the "Art of Xbox 360 exhibit", complete with pictures at YYZTech.ca. Thanks!

I think the separation between art and commerce lies in the intent.

Here Microsoft is selling games, exhibiting the art secondary to that. In other art shows, the intent is to truly exhibit the art, with sales being a secondary effect (assuming people like your work).

2. Thanks for the linkage and interest. I was definitely expecting a major commercial angle to the show, but I was hoping for a lot more "behind the scenes" artwork (sketches, early renders), more pieces on display, and more gallery space used. To be honest, I was surprised this event was as weak as it was, as it seemingly could have been so much more with only a little more effort.

3. hey, i'm a new reader to joystiq... love the site... was pleasantly surprised to find this article... photojunkie is my bro... and we went to the opening night party together... i'm the kid in the last shot trying to play kameo...

the exhibit was smaller than i thought it would be, and obviously very pro-microsoft... but it was still pretty cool to see the concept art up close... good stuff...