Kong is loose with the gamerscore points 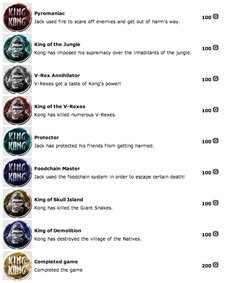 Washington Post has a good, albeit basic, article up about gamerscore points. They mention the popularity of King Kong in relation to its easy to earn 1000 gamerscore points. In my review of Kong I mention that it has "accrued a reputation for being especially loose with its gamerscore points." Juxtapose that with the Wahington Post writer's experience with another title: "Having finished up playing the slick World War II game Call of Duty 2 on 'normal' difficulty, for example, I unlocked 150 points for my Xbox 360 gamerscore." 150 points!

The real question is, who oversees the allocation of points? Developers could sell a title they know is crappy just by filling it full of easy points. What if 25 to Life came out on 360 chocked full of easy points? There is a real danger of gamerscore inflation where, depending on which games you play, the time and skill spent might not be commensurate with the points rewarded. Hopefully the disparity evens out as more titles are released.

(Image is from Xbox 360 Achievements.)

I was thinking the same thing. Some of these Xbox Live Arcade titles are insanely hard to get points on. Bejewled for one... Truth be told, the gamerscore really doesnt matter, it's the achievement itself that people should look at.

I believe points should be based on how many people currently hold the award.

This dynamic system would constantly keep people on the edge, and encourage competitivity.

You gotta give credit to Microsoft on this one... the concept of gamerscore has an addictive quality to it that encourages people to buy more and more games, just so they can boost their gamerscore.

But I, for one, am not going to buy or rent a game just so I can boost my gamerscore.

This is true, but why does it matter? It isn't as if you can use those points for anything. Now if you could transform those points into XBOX Marketplace points, then it might be a problem.

I'm sorry but maybe i'm lost on this one, but why do I care about gamescore points again?

I doubt MS would change this. Not only does it prove there gamerscore is addictive (comment 3) but it also helps sell games. Even if people rent the game, the rental stores will need copies purchased so people can rent them.

I haven't played King Kong yet, but Madden 06 is by far the easiest game to get points, minus the 400 point achievement for playing 30 years on a franchise that can be simmed.

"and even those who aren't connected now can still rack up points and plug in later to show off their skillz."

Actually that is incorrect, they must have a Live account saved on the hard drive in order to be offline and receive their gamerscore. When they login, then they get the ones that the Live system missed. If they get a new account it does not pick up ones they got before Xbox Live

When the Xbox 360 had just come out, I read a comment here that said your overall Gamerscore wasn't what mattered, but how many achievements you got per game. This guy has been proven right.

I could rent Madden, King Kong, and a few other games with easy achievements, and quickly rack up a high gamerscore. Instead, I only have PGR3 and Kameo, which dole out achievements in a more fair manner.

And yes, Bejewled achievements have got to be the most ridiculously difficult to get yet. The Endless achievement requires some 350+ hours of gameplay, and checking the leaderboards, only about two people have gotten it thusfar. That is absurd!

I agree that achievement points should depend on Xbox live leaderboards.

asurroca, if you play a game that has plenty of achievements, like PGR3 or PDZ, you will have more achievements than somoene who just plays Madden and King Kong. Madden has like 5 achievements, but PDZ and PGR3 have tons.

The reason I went out and rented King Kong & NBA2K6 was b/c I realized how easy it was to gain the points. 2K6 is even easier than Kong to rack them up with 150 points for scoring 50 in a game, 250 for grabbing 20 rebounds and getting a tripple double. I got all 1000 in one game. So yeah, they've hooked me on Achievements.

Yes gamer points are very addicting.Once you get some you cant stop.I rented king kong just for the 1000 points.You can finish the game in ONE sitting.Very easy game.

Any system where the more games you buy (the richer you are) means the more points you can get is totally flawed.
A bunch of easy points from lots of games is not equal to totally finishing a game and all its side quests and mini-games. Yet they can get the same points.

The points system is just for rich kids. Us gamers will check the achievements.

Achievement points are great, but shouldn't be given away to easily... FIFA 06 and I believe all the other EA sports titles are too easy.

If only all APs where as difficult to get as all of Duty 2... those pesky veteran levels where worth every one of my 1,000 achievement points on that game!

I wonder how difficult its going to be to get all 50 achievments on Oblivion!

I haven't really gotten into the whole gamer points thing, because they mean very little, especially to someone like me who is a casual gamer and has so few. But, like a previously commenter said, if they were somehow connected to a reward on Live (20% bonus on a one time microsoft points purchase, access to special online events, access to special gamercard features, etc.)then it would even encourage a casual gamer like myself to buy/rent games solely to rack up points.

I can sympathize with the Washington Post writer; when I finished COD2, I expected some fairly decent score, but when I saw 150, my jaw hit the floor. It was even MORE shocking because they awarded 50 points for completing the training level!

Does that mean WWII was three times as tough as basic training was? I'll go down to the VFW and ask them, in between drinks. ;->

Obviously those plans got scrapped for whatever reason. I suspect they didn't have enough time before launch.

Who really cares? It's just bragging stuff anyway. I for one could care less if I have a ton of points or accomplishments posted up for all to see. It's not incentive enough for me to start playing games with 'easy points'.

Well, for some people they're for bragging. I use them to compare game progress between me and my friends.

Another neat thing I saw was in a DOA4 forum where someone was talking shit about how easy it was to unlock all the costumes and that they did it in one day. Well, someone punched up his achievements list and let him know that it was actually 5 days between his first achievement and that one.