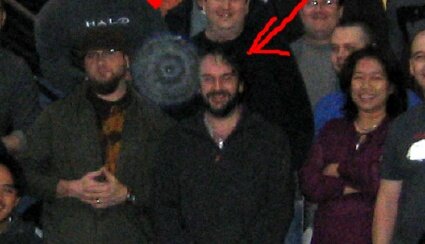 Peter Jackson recently visited with Bungie, ostensibly to talk about the upcoming Halo movie he's producing, but surely also to jam a couple rounds on Halo 3 (even though nothing's been announced yadayadayada). Here's what Bungie's Frankie had to say about the visit:

"...a week or two ago, our new building was graced by the presence of one Mr. Peter Jackson, director of the Lord of the Rings trilogy, King Kong, Heavenly Creatures, Meet the Feebles and more. In short, a genius. You may or not know that he is also signed up as executive producer on the forthcoming Halo movie. Mr. Jackson was not only nice enough to come visit, but also to pose for a photo with the entire Bungie crew... So to summarize, a famous director came to a building and got mobbed by rabid fanboys, many of whom are in their twenties and thirties."

I have a feeling PJ might have been geeking out a little bit as well. I imagine a mutual appreciation society.

You ever been to Kirkland? It's like the deadzone suburbia of Seattle. Ugh.

That's probably why they moved there iomatic, because it ISN'T a busy town.