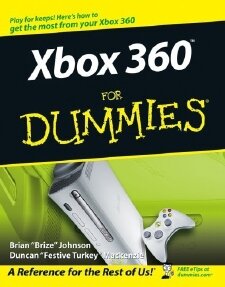 I don't think any self-described Xbox 360 Fanboy will have much of an interest in the release of Xbox 360 for Dummies, but the book's pedigree was interesting. Authors Brian "Brize" Johnson and Duncan "Festive Turkey" Mackenzie are both Microsoft employees, so the assumption is they're uniquely capable of writing a book about the Xbox 360. From the Amazon description:

This friendly guide shows how to maximize both gaming and non-gaming features of this amazing machine. * Topics covered include hooking up Xbox 360, taking advantage of HDTV and Dolby capabilities, using built-in digital video recording and wireless functions, storing media files, playing music, and displaying photos * Shows how to have even more fun by taking an Xbox online for massively multiplayer gaming, instant messaging, and more * Discusses the social potential of the Xbox, which people can use to make new friends, join groups and teams, and even throw fantastic parties * Includes tips for securing the Xbox from online threats

Sounds like there might be an interesting tip or two in there. What I really hope the book explains is if "Festive Turkey" is actually Duncan's nickname. I'm guessing it's his gamertag.

It's his gamertag. He's Canadian... go figure. :) Hey, if you get a chance to read it, we mentioned Joystiq! I don't think Xbox360Fanboy was up yet when we finished writing.

2. Sounds like a decent read. It's just another reason for my wife to think I'm an "Uber" dork! I don't mind though, she knew it before she married me!

3. I saw this on amazon not too long ago (past week or two). Figure it would make a perfect gift on april fools day :-p

4. Happens I skimmed through it yesterday at B&N before I read this article, what a coincidence. Anyways interesting tips on how to turn on the box, how to create a gamertag, and yes even multiple gamer tags.

Can the 360 actually capture video?

Please keep your comments relevant to this blog entry: inappropriate or purely promotional comments may be removed. Email addresses are never displayed, but they are required to confirm your comments. To create a live link, simply type the URL (including http://) or email address and we will make it a live link for you. You can put up to 3 URLs in your comments. Line breaks and paragraphs are automatically converted — no need to use <p> or <br> tags.

Xbox 360 Fanboy is part of the Weblogs, Inc. Network, a network of more than 90 blogs. Here are some recent headlines from our blogs: