Your planet is calling! Answer it at GreenDaily

Major Nelson, a man for all seasons 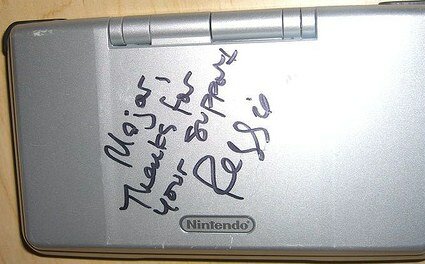 It turns out, despite evidence to the contrary, that Major Nelson is not all Xbox all the time. Yesterday he let his inner DS Fanboy shine out making it to the Mario Kart meetup with Nintendo's Reggie "The Reggie" Fils-Amie. It's not clear if he got his ass kicked or his name taken, but he at least got Reggie's name written on his DS. Reggie wrote, "Major, Thanks for your support. Reggie."

Sometimes in the midst of all this [console] war, it's easy to forget that up in the great Northwest, Microsoft country is also Nintendo country. Now Sony country... that's another story.