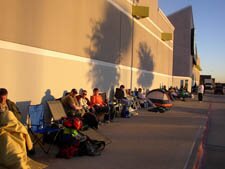 MSNBC has filed the latest report on the wide-spread hype, euphoria and frustration that accompanied today's Xbox 360 launch. Microsoft, of course, is on hand with their insights:


“It’s going to be tough to find an Xbox 360 this holiday season,” David Hufford, group director of the Xbox platform, acknowledged to MSNBC.com. “We’re doing everything we can to replenish the retail channel. We have thousands of people working around the clock manufacturing Xbox 360s, stocking those onto 747 jet airplanes and flying those planes into the United States as quickly as possible.”

Out here in San Diego, our Best Buy sales reps were cockbites. They didn't do anything for us. Also, not only did they refuse to referee the line (which led to cutting and a drunken fight nearly emerging), but they also refused to enforce their one-per-person policy. One guy walked out of there with THREE PREMEMIUM PACKAGES!!!

Thinking that you are probably going to get the last 360 in San Diego, but then see the sales rep give it to the guy in front of you, then say "Tough luck buddy." and close the door in your face: Un-freaking-believably shitty luck.

yeah, i know i got the shaft at gamespot in chicago.... i was the 4th in line on the day they started taking preorders and lo and behold, by the time those assmunchers printed their presell printouts on nov 15, i was bumped down to 23rd.. bastards....

Talk about a RIP OFF! We PRE-ORDERED our X-Box 360 way back in June of 2005 from Game Stop. They PROMISED us the unit would be delivered by November 21st. Guess What? They only received 23 units. Now they tell us that they have "...no idea.." when any additional units will be shipped to them! We traded in our old X Box, a Game Cube and our Playstation 2 for credit on the 360. SO we are now stuck with waiting for them to come through. I would say that this is theft of services. How about if I walk into their store and take home an expensive product and tell them I will pay them later? That is what they did to us. Promised a product that I pre-paid for, and now they can NOT deliver on it.

Maybe things would go faster if we made them here instead of outsourcing and sending all of our money to a communist country.

wally what Best Buy did u go 2 national city or mission valley?

What stupid comment is that? Ps3 Fanboys on a 360 Blog? Don't you have anything to do?

And, to talk about your gorgeous PS3 - how can you have faith in a system, that has about the same specs and graphically less abilities (2nd Gen 360 games vs. 1st Gen PS3 games - do the math), and comes ONE YEAR after.

Hey.... maybe you guys should count yourselves lucky to not be in the first shipment... I was up at the midnight lauch getting mine after standing 1.5 hours in the cold. (reseverved mine in May) Rushed home, unpacked that box and WTF?! there was somethign rattling inside when i picked it up... then i look at the machine and i an see that the casing isn't even snapped together properly. I freak out, but i set it up anyway. Get it connected to Xbox live after giving up on retrieving my old gamertag. then i decide to load a game. the grinding noise that arose from my system when it began to spin the disc was truly horrible to hear. and, of course, the game did not load.

you will notice i don't have any thing that requires a disc on there.

Hey Ruben. I went to the one in Mira Mesa.

Wow, I was planning to get the 360 on Christmas, but Im having to have doubts... Not only that but I might not be able to get it anyways... Microsoft really better be working because this is a gigantic problem... Not only screwing potential customers because of the insufficients supply, but then the next morning, the 'lucky' few who did get them are complaining about MULTIPLE problems, not just an isolated discretion. I dont know about the rest of you, but Im worried of buying one..

Hi guys, I came all the way from Iceland to New York City to get one and I was the last one to get the core package from J and R store in downtown Manhattan after I had been in 5 stores and they were all sold out and getting lost in Tribeca, foreigner of course. Not Im wondering, Im going back to Iceland with it and there we have the 220V electricity system so if anyone knows what I should be caucious of doing when connecting it in Iceland?

Hi guys, I came all the way from Iceland to New York City to get one and I was the last one to get the core package from J and R store in downtown Manhattan after I had been in 5 stores and they were all sold out and getting lost in Tribeca, foreigner of course. Not Im wondering, Im going back to Iceland with it and there we have the 220V electricity system so if anyone knows what I should be caucious of doing when connecting it in Iceland?

My loss is their loss said...

Well what can I say, it appears that I was one of the many that didn't get the 360 on launch day, which may pan out be a good or bad thing.
Let's start with THE GOOD: Console wars that demand the best innovation and technology availible, it's great when the competition is so close that it adds the snooze you lose touch. I didn't pre-order and have a obligation( $ or Trade-in) with an unforfilling store, Can see the inital bugs and hardware issues as an on-looker. Imagine standing in line, getting pneumonia and having a busted unit(Home sick and playing solitare because you traded in your old system, S.O.L.)
THE BAD: Possibly not getting my hands on unit until after Christmas.
THE UGLY: (Microscope)A corporation that views it's potential customers as specimens. They watch the news and see all the people lining up and camping in front of stores creating all kinds of buzz, which is a great advertisement tool. I ask you this, If Sony and Nintendo launched on the same day as the 360 do you think there would be an issue with supply and demand? Probally Not, Remember all the hype on the last launch? I clearly remember seeing the same thing, people lined up in the cold, paying rediculios prices on ebay only to walk into a store
a few days later and buy one off the floor.

Well bottom line is I will probally end up with all 3 systems like I alway do and then weigh out which one deserves the bulk of my money(Games,etc.)

most of the people on my friends list who have a 360 are still playing halo2, they claim that it still has the best gameplay online. so be patient, wait for them to come out with a cooler version, the thing sounds and smells like it's about blow up.